This is an article written about the one of the teaching programs used by the tribe. It was written by Dr. Judith Maxwell, Rebecca Louise Schawe and Williedell Schawe Professor of Linguistics and Anthropology. 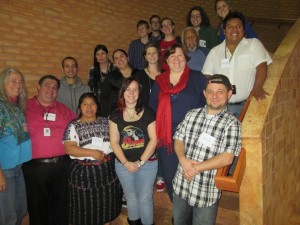 The participants of the 2015 Tunica language immersion camp

Luhchi Tashle! Beautiful language. January 6-9 twelve Tulanians participated with six Tunica tribal members, educators and administrators in a Tunica language immersion workshop. Activities each day began with a welcome song (The Daybreak Song, The Deer Song, The Raccoon Dance Song, The Horse Dance Song) and a Tunica prayer. On the first day, master language teachers, Ixnal and Kawoq Cuma Chávez, who have been teaching for Tulane’s Kaqchikel course in Guatemala for 20 years, taught five Tunica lessons using the immersion methodology we have used successfully. This methodology was designed to be implemented by native speakers who are fluent in their language and adept at demonstrating the language in context. Applying these techniques in a language without native speakers is a challenge, but Ixnal and Kawoq showed it could be done. After a fun day of greetings, learning to introduce ourselves, naming things in the classroom, doing simple actions, and dividing the color spectrum in new blocks(i), we split into groups, each one tasked with preparing a lesson for the following day.

Day Two began with the song call to awaken, rejoice and work, a prayer and then a grammar lesson (given in English). Then we switched back to all Tunica. We had three morning lessons, then a game and lunch. In the afternoon, two more lessons and then planning for the following day.

On Day Three, we added an hour of “speed-chatting”. Much like speed-dating, we would form conversational groups, talk for five minutes and then switch to a new group and a new set of partners. I was amazed at how much we were able to say. The Tulane students all asked to continue the conversation practice in our working group and class this semester. The class was restructured on the spot to build in this important milestone activity.

On Day Four, we followed the established routine of song, prayer, grammar lesson, and 5 Tunica language units. In the afternoon, we evaluated our progress and outlined the next steps for expanding our language competence, improving the Tunica language textbook we are writing, and developing more games and supporting materials. We closed with a cultural exchange. Kawoq and David Rivas, a Tunica elder, played guitars together and took turns singing, Kawoq in Kaqchikel, his mother tongue, and David Rivas in Spanish.

We Tulanians drove off away from the sunset, hopefully toward a new dawn for the Tunica Language. Lapuhch. “It would be a good thing.”